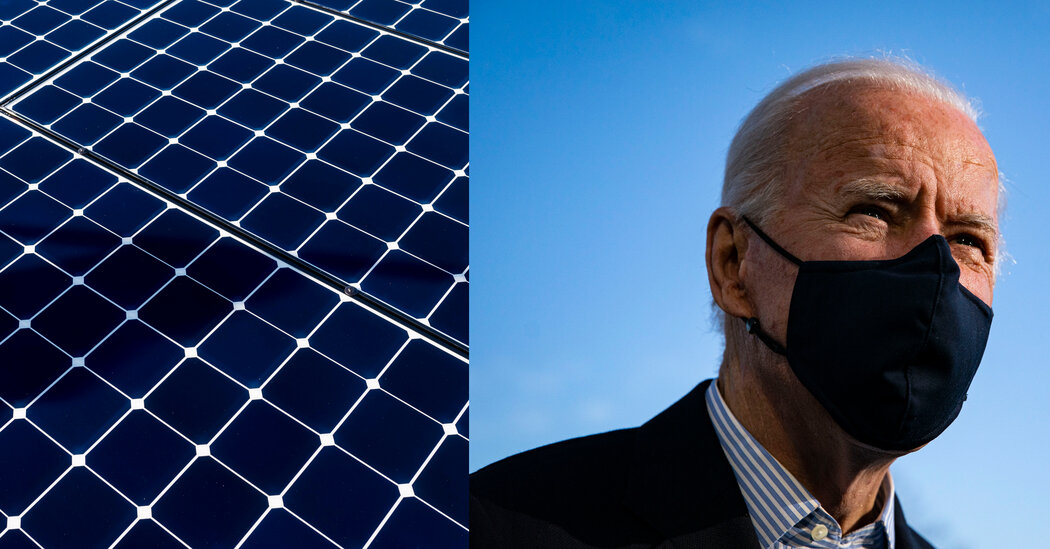 On April 22, Earth Day, the leaders of more than three dozen countries, among them 17 nations responsible for four-fifths of the world’s emissions of greenhouse gases, will convene at a virtual summit. The purpose is to discuss where the world goes from here on climate change and what each country must do to limit Earth’s warming to no more than 1.5 degrees Celsius compared with preindustrial levels — a threshold beyond which scientists predict irreversible environmental damage.

All eyes will be on the person who organized the summit, President Biden. It is a bit melodramatic to call this a moment of truth for Mr. Biden, but it is a critically important moment for a new president who has promised to reclaim a leadership role for America on a pressing global issue that his predecessor foolishly abandoned. Likewise for a president who has pledged to make America’s economy carbon-neutral by midcentury and who has said he will work tirelessly to persuade other major economies to do the same. The ideas he presents must therefore be not only ambitious but also credible.

Anyone with the energy to slog through acres of verbiage will find the elements of a plausible strategy embedded in his $2 trillion recovery plan. The plan is not exactly what his energy secretary, Jennifer Granholm, enthusiastically described as a “once in a century” chance to reinvent America’s energy delivery system. (One would hope for more such moments in this century.) But it offers a great deal more than one would deduce from the reactions of left-of-center groups. The Center for Biological Diversity, for instance, complained about the plan’s “gimmicky subsidies,” its fealty to free markets and its failure to end oil and gas drilling much more quickly.

The plan has many moving parts, two of which are transformative. One is aimed at reducing emissions from cars and trucks, America’s biggest source of carbon dioxide emissions. Mr. Biden is betting heavily on electric vehicles, which today make up only 2 percent of the vehicles on the road. To “win the E.V. market,” as he put it (China being the main competitor), he proposes $174 billion to build half a million charging stations along the highways — a small fraction of what will be needed, but a good start — plus an array of tax credits aimed at persuading manufacturers to make E.V.s and equip them with batteries that can be recharged as quickly as one can fill up a tank of gas. Also, point-of-sale credits to get people to buy the finished products.

The second potential game changer is a national clean power standard — a federal mandate requiring that a certain (and steadily increasing) percentage of electricity be generated by zero-carbon or very-low-carbon sources like wind, solar, hydroelectric and nuclear power. All those E.V.s and residential heat pumps in Mr. Biden’s electrified America will need huge amounts of power, and it best be clean. One effect of this rule would be to hasten the transition from fossil fuels. Coal is already on its way out, and natural gas’s days are numbered unless some way can be found to capture the emissions from power plants that use it.

This proposal could have tough sledding in Congress not only because Congress has many devoted friends of oil and gas. Clean energy standards have traditionally been left to the states, 30 of which plus the District of Columbia have already adopted them. But there are encouraging signs of buy-in from big utilities, in much the same way as some of the big car companies, most recently General Motors, have embraced a future consisting mainly of E.V.s.

Here again, tax credits and subsidies loom large. For instance, credits for renewable sources like wind and solar power, for years subject to the whims of Congress, are given a 10-year extension under the plan and thus a degree of certainty they have never had.

As a whole, Mr. Biden’s climate plans, like the broader jobs plan of which they are a part, rely on private and public investment, and little mention is made of regulation, which occupied center stage in President Barack Obama’s emission-reduction plans. But Mr. Biden has not precluded regulation. The difference is that regulations will henceforth play a complementary role, albeit an important one.

Obama-era rules revoked by Mr. Trump will most likely be restored and perhaps strengthened — among them, rules aimed at reducing planet-warming emissions of methane from new and existing oil and gas facilities and rules to reduce carbon emissions from vehicles. The vehicle rules would be particularly important, since they would require manufacturers to produce steadily more-fuel-efficient cars before the transition to electric vehicles really kicks in, which could be a decade or two down the road.

One overlooked fact in the discussion of Mr. Biden’s plans is that the economics of clean energy are moving his way — due in no small part to the $800 billion economic recovery plan enacted in 2009 under Mr. Obama. That plan, which has been belittled as too small, included $90 billion or so in tax credits, loans and other incentives for clean energy projects, including weatherizing homes and jump-starting E.V.s. (There may not have been a Tesla had it not been for a timely loan under the program.) The effect on renewables like wind and solar was particularly striking, and the prices for both have dropped to the point that both compete favorably with fossil fuels.

A mostly renewable energy landscape is no longer a pipe dream. Nor is a less menacing climate.

Visualised: glaciers then and now | Environment