A landmark UN climate report has warned that global heating is irreversible and issued its starkest warning that, unless meaningful action is taken to reduce emissions, the world is on course for catastrophic warming. The sixth Intergovernmental Panel on Climate Change report, which was published on Monday, says temperatures are likely to rise by more than 1.5C, bringing widespread extreme weather.

The Guardian’s environment editor Damian Carrington tells Michael Safi that the world’s leading politicians now have nowhere to hide if they do not urgently act on the conclusions of the report. As the UK prepares to host the Cop26 climate talks in Glasgow later this year, Carrington says the path to limiting global heating to 1.5C is narrowing and commitments need to be backed with action to avert disaster. 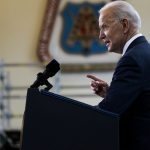 Climate crisis is not a ‘partisan issue’, young Republican tells his own party | Climate change