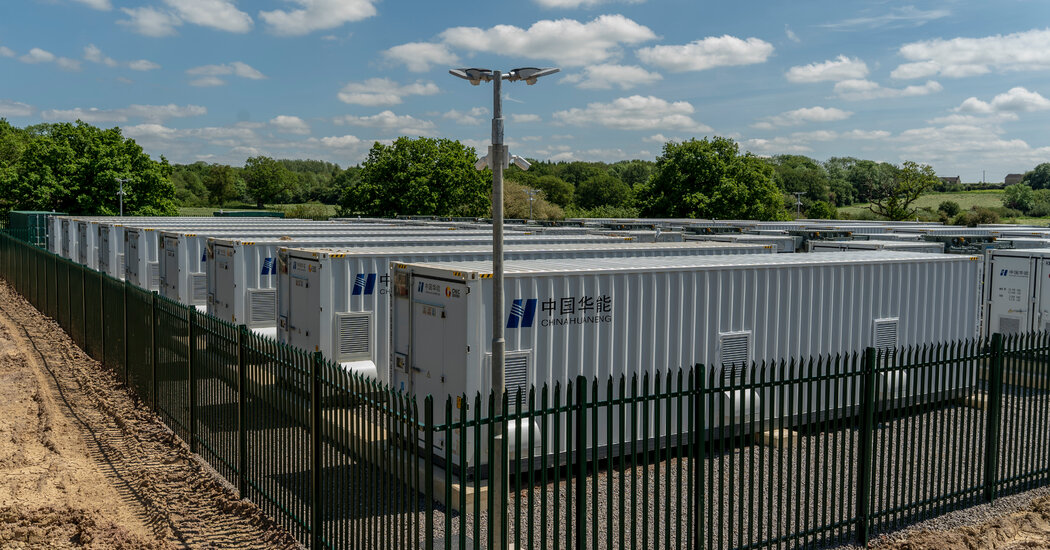 MINETY, England — On a clearing at the edge of a farm field, 40 big rectangular boxes the size of shipping containers sit behind a tall fence. Packed inside are stacks of lithium-ion cells and other electrical equipment.

Wired together, these units will form Europe’s largest battery, the operators say, able to pump out powerful bursts of electricity to offset fluctuations in the power grid when ebbing winds or cloudy skies slow the generation of renewable electricity. As more power comes from wind and solar, the need for giant batteries will grow.

One of the companies behind this 40-million-pound (about $56 million) project is Royal Dutch Shell. Like other oil giants, Shell is under pressure to move away from climate-damaging fossil fuels, and it is recasting itself as more of a renewable energy company, looking for investments as it sidles toward a new future.

Shell’s foray into the English countryside in Minety, about 90 miles west of London, provides a clue to that future. But for a company more used to offshore oil rigs and producing natural gas, the giant battery is part of what some critics see as a tortuous turnaround that, they say, must quicken to have a real impact on the factors causing climate change.

A subsidiary of Shell called Limejump is managing the device — it manages many such batteries — and will share in revenues from selling the power stored in it in a deal with two Chinese investors.

Limejump is the type of business that catches the eye of Shell executives these days. With 80 software engineers, traders and forecasters, the company buys electricity from 675 wind farms, solar installations and other mostly renewable generators scattered across Britain, and sells it to businesses that want their energy to be green.

The company, which Shell acquired two years ago, is one of dozens of investments the company has made in the clean energy area. Another is in Sonnen, a German battery supplier that fashions its own power networks to challenge big utilities. Shell is also building up an electric vehicle charging business around the globe and nurturing hydrogen fueling stations in California.

Ben van Beurden, Shell’s chief executive, has been talking about the need to cut emissions since 2017. In the view of some, though, Shell has dragged its feet. The company’s clean energy investments since 2016 add up to $3.2 billion, while it has spent about $84 billion on oil and gas exploration and development, according to estimates by Bernstein, a research firm.

“You cannot claim to be in transition when you only invest” such a small percentage of capital in new businesses, said Mark van Baal, founder of Follow This, a Dutch investor activist group.

All of the big oil companies, especially in Europe, share a similar dilemma. Their leaders see that demand for petroleum products is likely to eventually fade and that their industry faces growing disapproval, especially in Europe, because of its role in climate change. Shell is responsible for an estimated 3 percent of global emissions, mostly from the gasoline and other products burned by its customers.

Yet Shell and other companies still make nearly all their profits from fossil fuels, and they are naturally wary of shedding the bulk of their vast oil and gas and petrochemical assets — worth about $180 billion in Shell’s case, according to Bernstein — especially when the consumption of petroleum is forecast to continue for years, a point underlined by this year’s surge in oil prices.

In a recent article on LinkedIn, Mr. van Beurden wrote that “it would not help the world one bit” if Shell stopped selling gasoline and diesel today. “People would fill up their cars and delivery trucks at other service stations,” he wrote.

Shell also appears to be playing a longer, more cautious game than some rivals, like BP, that are pouring money into renewable energy projects. Shell executives seem to be skeptical about the profit potential of just constructing and operating renewable generation assets, like wind farms.

“It’s a much more multifaceted strategy than I think people necessarily anticipated,” said Adam Matthews, director of engagement and ethics at the Church of England Pensions Board, who has worked closely with Shell on targets to reduce its emissions.

Shell executives say they want to put their chips on technologies and businesses that may evolve into key cogs in the cleaner energy system that is emerging. They want to not only produce clean energy but make money from supplying it to businesses like Amazon and retail customers through large, tailored contracts, or electric vehicle plug-in points or utilities that Shell owns. The investment numbers will increase, they say, to up to $3 billion a year of a total of about $20 billion annual capital expenditure.

“We are thinking ahead; where is the future going?” said Elisabeth Brinton, Shell’s executive vice president for renewables and energy solutions.

Ms. Brinton cited Limejump as the type of new energy move she wants to make. Buying the eight-year-old company made Shell a player in batteries, which some experts consider the hottest area in renewable energy. Limejump also filled holes in Shell’s abilities in the buying and selling of electric power, which is traded on exchanges like oil or soybeans — a business likely to grow as the world turns to electricity to curb emissions.

Batteries like the one at Minety address a shortcoming of wind and solar systems: Their output varies with the wind and the sun. In addition, clean-energy power grids must accept electricity from a broad range of sources — from giant wind farms in the North Sea to rooftop solar arrays — and yet provide a reliable, constant stream of power whenever a homeowner flicks on the lights. It makes managing power grids much trickier than it used to be.

Limejump manages dozens of batteries, and more are coming, some likely larger than the one at Minety, that can respond rapidly when the grid “asks for” a burst of power.

“This is the way we actually get renewables to properly work,” said Catherine Newman, Limejump’s chief executive. At the moment the only practical way to smoothly add more wind and solar power to the grid is through additional batteries, she said.

The arrival of the Minety battery, which has a capacity of 100 megawatts and is going through final checks before going live, means that wind power sufficient to light up several hundred thousand homes can be added to the system.

Shell’s financial strength was a key “enabler” in persuading two Chinese companies — CNIC, a government-backed fund, and China Huaneng Group, a power company — to invest around £40 million in the battery, according to Richard Thwaites, chief executive of Penso Power, an energy developer that arranged the deal.

Rubbing shoulders with people from start-ups like Limejump and Sonnen is bringing new talent and, maybe, new thinking to Shell, whose consensus-driven culture is notoriously slow moving.

“You need to be able to move fast in power,” Ms. Newman said. “Shell recognized that they are not good enough in that space.”

The pressure on Shell to change may increase. On May 26 a Dutch court rocked the company by ordering it to speed up its plans for reducing emissions. Mr. van Beurden responded by saying Shell would most likely accelerate its efforts to reduce carbon, but he also said the company expected to supply oil and gas products “for a long time to come.” One reason: to make sure it has the financial resources to invest in low-carbon energy.

Yet Shell executives seem uninhibited about making investments in new areas when they find the case convincing. This year, Shell bought Ubitricity, which installs electric vehicle charging points in lampposts and other structures in London and other cities.

Poppy Mills, who worked on the deal for Shell and now serves as Ubitricity’s commercial officer for Britain, said that even though the economics of such businesses were “challenging,” Shell had bought the company as a way to reach the large percentage of city dwellers who kept their cars on the street and didn’t have access to chargers.

“It was a gap in our portfolio, not having an on-street network,” she said.

That approach seems likely to propel the growth of clean energy at Shell and other oil companies.

“These businesses are tiny in the overall scheme of things,” said Stuart Joyner of Redburn, a research firm. “But they are the bit that is growing quite quickly.”

‘Our future might not look the same’: wildfires threaten way of life in California’s mountain towns | California