The widespread reliance on air conditioning in the US is explored in Eric Dean Wilson’s book After Cooling: on Freon, Global Warming, and the Terrible Cost of Comfort. The book explores how air conditioning has become one of the most effective ways to cool off – and explains how harmful chemicals that make our lives comfortable also contribute to the climate crisis.

The modern refrigerant – gas in fridges, freezers and air conditioners – was first introduced in 1930s in the form of a chemical called chlorofluorocarbons (CFCs), better known as Freon. This chemical escaped into the air over time, ripping a hole in the ozone layer. In 1987, a global agreement was reached to ban the production of CFCs – although every year an ozone hole reappears over Antarctica in October.

Wilson’s book is not a call to ditch air conditioners. He acknowledges that in a heatwave, refrigerants are life-saving. Prolonged hot temperatures can diminish people’s mental and physical capacity, and air conditioning is an effective heat management tool in classrooms. But before the widespread use of commercial air conditioning, our world was cooler – and in seeking comfort we have warmed our planet.

In an interview, Wilson reflects on the cost of American comfort.

So when I’m sitting 3ft away from a window AC unit, am I blasting harmful chemicals into my house or the atmosphere?

Air conditioners don’t consume or emit refrigerants directly. But what the chemical industry that produced air conditioners claimed was that they didn’t send Freon into the atmosphere. According to the industry, it was totally safe because it would never leak. Well, that’s not what happens. What happens, especially with car air conditioners, is that when a refrigerant is charged into a system, into an air conditioner, it slowly, over the course of like 15 years, leaks.

And even if it doesn’t, when getting rid of an air conditioner, the vast majority of people just pass it on the street, or put it in the dump, or something like that, which is technically illegal. But there’s no way to actually regulate that. Just walking down the street today, I saw two air window units just smashed on the street. It’s expensive to have somebody come and take care of them properly. And these units most likely have HFCs.

What was the alternative to CFCs once they were banned?

There are replacements like HFOs (hydrofluoroolefins) that don’t deplete the ozone layer. All evidence points to them being fine, but with each subsequent generation of refrigerants CFCs we’ve thought they were fine and they weren’t. I’m not a chemist, and I’m not an atmospheric scientist, but I see a pattern here that I’m quite skeptical of.

Can you speak about the reliance on AC during a heatwave?

In a heatwave, you have people who are susceptible to heat-related illnesses. These are people who tend to live in neighborhoods that have less access to natural shade, fewer trees, less access to parks, more asphalt that absorbs heat and can make areas of the city 10F hotter in some places.

Low-income residents are also more vulnerable. Even if they can afford the unit, they might be reluctant to turn it on because they might be behind on their energy bills. Also, what happens in the heatwave is that everyone in the city turns on their air conditioner, and it overloads the grid, and there’s a potential for blackouts.

One of the things that I write about very briefly in the book is pointing to the need for things like community solar, or community-controlled energy, rather than having a monopoly company that controls it. Because when profit is the driving motive, monopolies are not interested in saving lives.

The most lo-tech solution is planting more trees. Initiatives to make sure that there is lush vegetation on every street in New York, especially in working-class neighborhoods, where there tend to be less trees, I think that’s crucial. Another solution is sustainable design that incorporates passive cooling. There are innovative architects who are looking at nature, things like termite mounds, beehives, things that exist in the wild and regulate temperature.

Understanding how to shade, how to give light, but without direct sunlight that will heat a room. Things like incorporating natural wind into a room, and using better building materials that don’t absorb heat. And these cooling strategies don’t have to be enormously expensive, so I have a lot of faith in good design.

What do you hope people take away from your book?

The vast majority of cooling in the United States is not for emergency situations. And it’s not even for situations that, I would argue, make our lives better. So what I’m asking is for us to really consider how our level of comfort and what we’ve defined as comfort has been constructed. And whether our level of comfort has actually led to a planet that’s uninhabitable. I’m not calling for all of us to suffer at all, I’m actually calling for us to again, to redefine what it means to be comfortable. 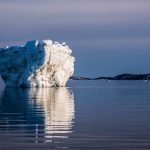