Academic papers often take time to leach out into public consciousness. One that did not filter through was a study from Anglia Ruskin University that analysed “nodes of persisting complexity”, in the face of “global decomplexification event”. What’s that, you ask. Places you can probably still get electricity and toilet paper when climate breakdown destroys the rest of the world. New Zealand and Finland top the list. Perhaps coincidentally, it recently emerged that Google founder Larry Page has been granted New Zealand residency.

The recently released “last chance saloon” Intergovernmental Panel on Climate Change (IPCC) report will surely add pressure on governments to “do something” about all this. After all, we can’t all move to a nice “persistent node”. But doing something, as we know, is hard. So, what we can expect instead is for governments to redouble their usage of a time-tested rhetoric of distraction called “getting back to normal”.

Instead, of telling us that we need to truly transform the way we live and organise society, we will be told that we can still carry on as we were, except perhaps with our fossil fuels and one-use goods replaced with green energy and recyclables. Maybe a bit less air travel, but still ‘back to normal’ with green edges.
This way of thinking is perhaps as dangerous as the climate crisis itself. While banging on about inflation as a threat to the poor is a rhetoric of reaction, getting back to normal is a rhetoric of distraction. Rather than pandering to our prejudices, it builds directly upon how our psychology has evolved over millennia – it plays upon two things that we are hardwired to believe.

The first is what statisticians call “mean reversion”. Basically, if you see someone really tall, that person is labelled an outlier. Most people are of middling height and so we all reasonably expect most of the people we encounter to be our “normal” size. Nassim Nicholas Taleb famously demolished this line of thinking with his idea of “black swan” events. The fact that you expect only short people to show up makes you vulnerable to the appearance of tall people. Apply to banking crises, pandemics etc. This type of thinking makes us vulnerable to extreme events.

The second is that there is equilibrium associated with that middle-of-the-distribution model where things don’t change very much. Just as I assume there are no 8ft people in my home town (simply because I have not seen one yet), I presume that shocks to the world I live in (meeting an 8ft neighbour) are temporary deviations from some kind of stable self-generating order (hanging around with folks under 6ft is normal).

The black swan is an ever present problem. But the equilibrium assumption may be even more pernicious because it rests upon a belief that human societies, and the natural systems that support them, have powerful self-equilibrating tendencies. Push too much one way and things break, sure, but then the system provides feedback and we restore the equilibrium – we get back to normal.

The economy is ground zero for such thinking. Not only is economics explicitly based on ideas of equilibrium, but in terms of policy we can normalise anything no matter how odd it truly is. Consider that when the global financial system was bailed out in 2008-9 by the world’s central banks, actions such as quantitative easing were supposed to be emergency measures. But over the following decade propping up markets became the new normal, so when the pandemic hit governments everywhere added 30% to the global debt stock while at the same time talking about getting back to normal.

But this pretence does not work with climate breakdown, it is a giant non-linear outcome generator with wicked convexities. In plain English, there is no mean, there is no average, there is no return to normal. It’s one way traffic into the unknown. As study after study shows, the one thing humans hate dealing with is uncertainty. Risk – odds you can count on – is fine. But systems with truly random outcomes freak us out. We are also terrible at dealing with scale. As evolutionary psychologists put it, “Our modern skulls house a stone age mind.” It evolved to solve problems in a pretty stable mean-reverting world with face-to-face interactions. When we encountered things that freaked us out in such a world, we filled in the gaps with a mutually agreed story (religion or political ideology, for example) that helped us ignore what we could not explain.

But now we live in a world we can explain, and yet rather than accept what we know and act upon that knowledge, we increasingly imagine our world to be different from how it actually is. That we can get back to normal (albeit with a few modifications) and that normal is a place of stability and comfort. “Yes, there are wildfires, but there are also floods, so it balances out, right?” Our coping mechanism is to ignore the big picture and focus on the local, which gives us a greater illusion of control at the price of increasingly misunderstanding the world we actually live in.

So, if you hear a politician talking about “getting back to normal”, remember that while this is comforting they are peddling a dangerous idea we are hardwired to accept. And if we keep accepting it as a plausible goal in the area of climate crisis, we will end up further away than ever from where we really need to be. As well as accepting the facts, it’s time to give up on getting back to normal and face the fact that there is no normal to return to. As the IPCC report makes clear, there are now only unknown and unfamiliar alternative futures that we can choose from. Embracing that uncertainty, rather than denying it, is the first step to choosing the right one. 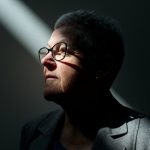