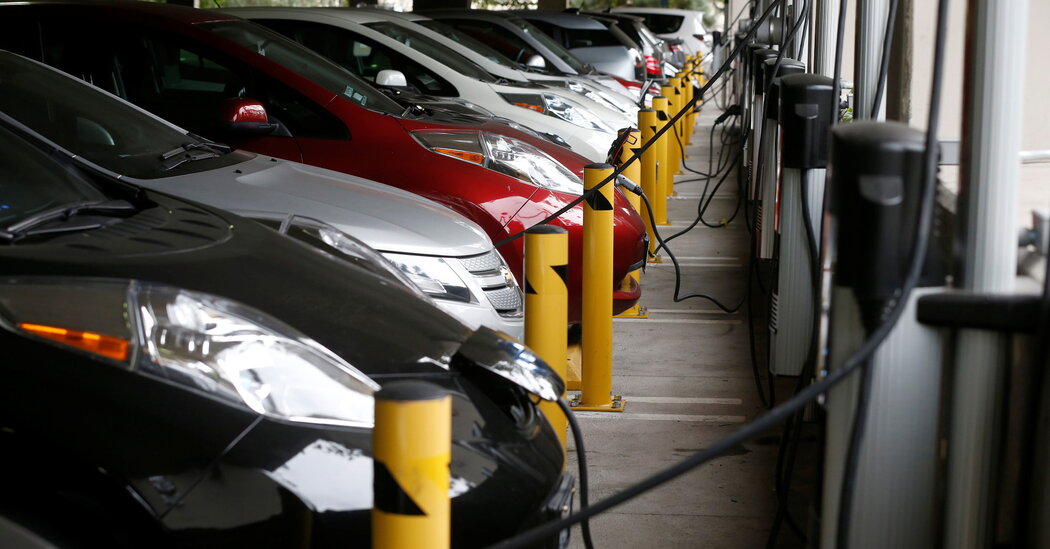 WASHINGTON — President Biden on Thursday will move to tighten tailpipe emissions, a leading cause of the carbon dioxide pollution that is heating the planet, and encourage American carmakers to rev up the sales of electric vehicles.

Mr. Biden will restore and slightly strengthen the regulations to the levels that existed under President Barack Obama but were weakened during the Trump administration. In addition, he is expected to announce that his administration is drafting a set of even more stringent auto pollution rules for both passenger vehicles and heavy-duty trucks.

“When I say electric vehicles are the future, I’m not joking,” Mr. Biden wrote in a tweet on Wednesday evening. “Tune in for big news tomorrow.”

He will also sign an executive order that sets a target that half of all vehicles sold in the United States be electric by 2030.

In a signal of industry support, the president will be flanked by the chief executives of the nation’s three largest automakers as well as the head of the United Auto Workers. The automakers will pledge that 40 to 50 percent of their new car sales will be electric vehicles by 2030, up from just 2 percent this year — on the condition that Congress passes a $1 trillion infrastructure bill that calls for $7.5 billion for a national network of electric vehicle charging stations.

Together, the government’s actions are intended to rapidly move the American car market away from the polluting combustion engine and toward the zero-emission electric vehicle that Mr. Biden says is essential to fight climate change.

Experts say it will not be possible for electric vehicles to go from niche to mainstream without making electric charging stations as ubiquitous as the corner gas station is today. And while labor leaders will attend the White House event, they remain concerned about a wholesale shift to electric vehicles, which require fewer workers to assemble.

But without a radical change to the type of vehicles Americans drive, it will be impossible for Mr. Biden to meet his ambitious pledge to cut planet-warming emissions by 50 percent from 2005 levels by the end of this decade. Gasoline-powered cars and trucks are the largest single source of greenhouse gases produced in the United States, accounting for 28 percent of the nation’s total carbon emissions.

“Today, E.P.A. takes a major step forward in delivering on President Biden’s ambitious agenda to address the climate crisis and create good paying, union jobs,” said Michael S. Regan, the head of the Environmental Protection Agency, which was an author of the new rules with the Transportation Department. “These stringent standards are underpinned by sound science and technical expertise, encouraging the development of technology and innovation that will drive America forward into a clean energy future.”

With the impacts of a warming planet seen in record droughts, deadly heat waves, floods and wildfires across the globe, scientists say that simply restoring Obama-era climate controls will not be enough.

“Obama started the work of moving us in the right direction to deal with climate change,” said Michael Gerrard, director of the Sabin Center for Climate Change Law at the Columbia Law School. “Trump tore all of that apart. Biden is now putting the pieces back together. But we are way behind. The much harder work is yet to come. The wholesale conversion of the transportation system and electric power system are World War II-scale enterprises, and it’s just starting.”

Administration officials said the new Biden standard would be 52 miles per gallon by 2026, calling it “the most stringent federal greenhouse gas standards in U.S. history.”

The White House estimates the regulations would cut two billion tons of carbon dioxide — about one-third of the total annual carbon dioxide pollution produced by the United States — and prevent the burning of about 200 billion gallons of gasoline.

The Biden administration then plans another set of tougher emissions regulations for vehicles produced beyond 2026. It is those rules that Mr. Biden hopes will essentially propel automakers to phase out the internal combustion engine. Since that second set of rules could be technically complex and legally ambitious, administration officials decided to first quickly reinstate the Obama regulations to cut some emissions while federal staff members take on the challenge of crafting the future rule.

“Depending on how they write it, that second rule will either put us on a pathway toward widespread use of E.V.s by later this decade — or it won’t,” said Jeff Alson, a former E.P.A. senior engineer and policy adviser who worked on the Obama auto emissions standards.

“It will be a challenge because regulatory agencies find it difficult to force major technology change,” Mr. Alson said. “It’s pretty rare. If you want to replace an internal combustion engine with a battery pack, and replace the transmission with electric motors — that’s replacing the guts of gasoline-powered cars. Forcing that kind of change will not be easy for federal agencies and politicians to do unless they have the support of the public and the automakers.”

In a joint statement, Ford, General Motors and Stellantis — the auto company formed this year after the merger of Fiat Chrysler and Peugeot — announced their “shared aspiration” to achieve sales of 40 to 50 percent electric vehicles by 2030.

But they need government support to translate aspirations into action, they wrote. “This represents a dramatic shift from the U.S. market today that can be achieved only with the timely deployment of the full suite of electrification policies,” the automakers said in the statement, seeking government help with incentives for car buyers, a charging network, investments in research and development and incentives to expand the electric vehicle manufacturing and supply chains.

A report last month by the International Council on Clean Transportation, a research organization, concluded that the nation would need 2.4 million electric vehicle charging stations by 2030 — up from 216,000 in 2020 — if about 36 percent of new car sales were electric.

Some environmental groups expressed skepticism that the auto companies would follow through on their promises.

“Today’s proposal relies on unenforceable voluntary commitments from unreliable carmakers to make up to 50 percent of their fleets electric by 2030,” said Dan Becker, director of the Safe Climate Transport Campaign at the Center for Biological Diversity.

“Voluntary pledges by auto companies make a New Year’s weight-loss resolution look like a legally binding contract,” he said, adding: “Global warming is burning forests, roasting the West and worsening storms. Now is not the time to propose weak standards and promise strong ones later.”

Labor unions, meanwhile, have expressed some uneasiness about a transition to electric vehicles, which require about two-thirds fewer workers to assemble than a gasoline-powered car or truck.

In a statement, Ray Curry, president of the United Auto Workers said: “While the U.A.W. notes that the companies have made voluntary commitments on electric vehicles, the U.A.W. focus is not on hard deadlines or percentages, but on preserving the wages and benefits that have been the heart and soul of the American middle class.”

‘Within minutes I was weeping’: the US pastor using scripture to mobilize climate action | North Carolina