Eight people have died and thousands have been evacuated from their homes as extreme wildfires continue to rage in parts of southern Europe.

The deaths occurred in Turkey, where for the past week firefighters have battled blazes in several coastal resort towns. Ten other people have been hospitalised. On Thursday, Turkish coastguards evacuated hundreds of villagers living close to a burning power plant in the Aegean province of Muğla.

In Italy, the number of large wildfires is estimated to have tripled this summer compared to the yearly average, causing millions of euros-worth of damage to the environment and economy in central and southern regions.

At the same time, the north of the country has been plagued by severe flooding and landslides in recent days, especially in Lombardy, where heavy rainfall caused Lake Como to burst its banks early on Thursday morning.

“Flooding and intense rains in the north, fires in the south – the country has been split in two,” said Fabrizio Curcio, the chief of Italy’s civil protection authority.

In Greece, Eleni Myrivili, who was appointed Athens’ first chief heat officer in July, described “apocalyptic” scenes after houses and villages burned down as a result of wildfires in the north-east of the Greek capital amid a protracted heatwave. The most intense days for the fires were Tuesday and Wednesday as temperatures reached 45C.

“There was an incredible fight with the fire all day yesterday,” Myrivili told BBC Radio 4’s Today programme on Thursday morning, adding that the blaze appeared to be subsiding. “The skies were grey and red, and there was ash falling on us. It was apocalyptic. On [Tuesday] night, the smoke came into my house and I had to sleep with a mask because I couldn’t breathe.”

She added that it was a struggle to be outdoors under the extreme heat. “You run out of breath and it’s very easy to feel as if you’re getting dizzy, a kind of brain fog.”

The Acropolis was also closed to visitors. “It’s an issue of health,” Myrivili said. “We don’t want people to be exposed to the sun and heat for long periods of time in an area where there is no shade. This is the thing with extreme heat – it’s a subtle, slow and invisible kind of enemy.”

The blazes in Greece also briefly cut off the main road leading to Athens and provoked fires in Olympia, the birthplace of the Olympic Games. Michalis Chrisochoidis, the citizens protection minister, said firefighters had waged “an all-night battle” to protect the archaeological site.

Meanwhile, villages were evacuated and 90 people were rescued by boat from a beach as another significant fire ravaged forests on the Greek island of Evia.

On Thursday night, Kyriakos Mitsotakis gave a special televised address in which he warned that emergency services faced a difficult night ahead as wildfires north of Athens leaped back to life and westerly winds were set to strengthen. “Unfortunately the worst is yet to come and the night ahead seems menacing,” the Greek prime minister said.

Since 28 July, 180 fires have broken out in Turkey, while more than 100 were still burning in Greece on Wednesday night.

In Turkey, a team from Agence France-Presse reported firefighters and police fleeing the 35-year-old Kemerköy power plant in Muğla as bright balls of orange flames tore through the surrounding hills.

Hundreds of villagers, many clutching small bags of belongings grabbed from their abandoned houses as the evacuation call sounded, piled on to coastguard speedboats at the nearby port of Ören.

The regional authority said “all explosive chemicals” and other hazardous material had been removed from the strategic site.

“But there’s a risk that the fire could spread to the thousands of tonnes of coal inside,” regional mayor Osman Gürün told reporters.

A few older villagers in Ören refused to leave the disaster-hit region even while thousands of others were shuttled out by car or boats racing along the Aegean Sea.

“Where do you want us to go at our age?” asked 79-year-old Hulusi Kinic.

“We live here. This is our home. Our last solution was to throw ourselves in the sea [if there was an explosion], but thank God that did not happen.”

In Italy, the majority of the fires have hit southern regions including Lazio, Campania, Puglia, Calabria, Basilicata and, in particular, Sicily, where several fires are currently active between the port city of Messina and capital of Palermo.

There have also been blazes in the central Tuscany, Umbria and Abruzzo regions, where on Sunday holidaymakers had to be evacuated after wildfires devastated a pine wood near a beach in the city of Pescara.

The first significant wildfires in Italy, between 24 and 26 July, destroyed 10,000 hectares (24,710 acres) of forest and forced the evacuation of 800 people from their homes in south-west Sardinia. Farms were also destroyed and many animals perished. “It was a catastrophic event,” said Roberto Cingolani, Italy’s ecological transition minister. “On all of these incidents, we need to reflect.”

Coldiretti, Italy’s main farmers’ association, said the number of wildfires has tripled in 2021 compared with the yearly average between 2008 and 2020. “It is a real national emergency for the safety of people and the economy,” Coldiretti said in a statement.

With several arrests made across Italy in recent days, Cingolani said 57% of the fires were malicious and 13.7% were due to negligence.

“More than 70% of the fires in Italy are our responsibility,” he added. “Less than 2% are caused naturally, for example by a lightning strike, for 4.4% the cause is undetermined and 22% are unclassifiable situations in which it is difficult to know what triggered the fire.”

The landslides and flooding in the north of Italy have also affected the Alto-Adige region, where a landslide blocked the Brenner pass close to Italy’s border with Austria. 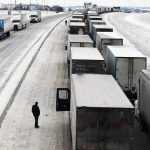