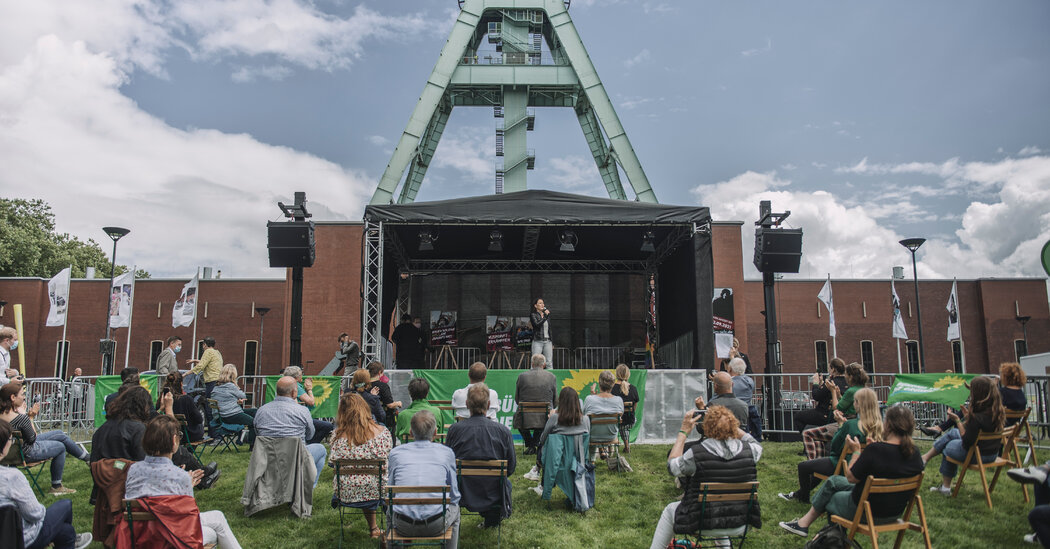 BOCHUM, Germany — The woman who wants to replace Chancellor Angela Merkel strode onto the stage in sneakers and a leather jacket, behind her the steel skeleton of a disused coal mining tower, before her a sea of expectant faces. The warm-up act, a guy with an Elvis quiff draped in a rainbow flag, sang “Imagine.”

Annalena Baerbock, the Green Party candidate for chancellor, is asking Germans to do just that. To imagine a country powered entirely by renewable energy. To imagine a relatively unknown and untested 40-year-old as their next chancellor. To imagine her party, which has never before run Germany, leading the government after next month’s election.

“This election is not just about what happens in the next four years, it’s about our future,” Ms. Baerbock told the crowd, taking her case to a traditional coal region that closed its last mine three years ago.

“We need change to preserve what we love and cherish,” she said in this not necessarily hostile, but skeptical, territory. “Change requires courage, and change is on the ballot on Sept. 26.”

Just how much change Germans really want after 16 years of Ms. Merkel remains to be seen. The chancellor made herself indispensable by navigating innumerable crises — financial, migrant, populist and pandemic — and solidifying Germany’s leadership on the continent. Other candidates are competing to see who can be most like her.

Ms. Baerbock, by contrast, aims to shake up the status quo. She is challenging Germans to deal with the crises that Ms. Merkel has left largely unattended: decarbonizing the powerful automobile sector; weaning the country off coal; rethinking trade relationships with strategic competitors like China and Russia.

It is not always an easy sell. In an unusually close race, there is still an outside chance that the Greens will catch up with Germany’s two incumbent parties. But even if they do not, there is almost no combination of parties imaginable in the next coalition government that does not include them. That makes Ms. Baerbock, her ideas and her party of central importance to Germany’s future.

But Germans are still getting to know her.

A competitive trampolinist in her youth who became a lawmaker at 32 and has two young daughters, Ms. Baerbock bolted onto Germany’s national political scene only three years ago when she was elected one of the Greens’ two leaders. “Annalena Who?” one newspaper asked at the time.

After being nominated in April as the Greens’ first-ever chancellor candidate, Ms. Baerbock briefly surged past her rivals in Germany’s long-dominant parties: Armin Laschet, the leader of the Christian Democrats, and Olaf Scholz of the center-left Social Democrats, who now leads the race.

But she fell behind after stumbling repeatedly. Rivals accused Ms. Baerbock of plagiarism after revelations that she had failed to attribute certain passages in a recently published book. Imprecise labeling of some of her memberships led to headlines about her padding her résumé.

More recently, she and her party failed to seize on the deadly floods that killed more than 180 people in western Germany to energize her campaign, even as the catastrophe catapulted climate change — the Greens’ flagship issue — to the top of the political agenda.

Hoping to reset her campaign, Ms. Baerbock, traveling in a bright green double-decker bus covered in solar panels, is taking her pitch to German voters in 45 cities and towns across the country.

It was no coincidence that her first stop was the industrial heartland of Germany, in the western state of North-Rhine Westphalia, which was badly hit by floods this summer and is run by Mr. Laschet, who has been criticized for mismanaging the disaster.

“Climate change isn’t something that’s happening far away in other countries, climate change is with us here and now,” Ms. Baerbock told a crowd of a few hundred students, workers and young parents with their children in Bochum.

“Rich people will always be able to buy their way out, but most people can’t,” she said. “That’s why climate change and social justice are two sides of the same coin for me.”

Leaving the stage with her microphone, Ms. Baerbock then mingled with the audience and took questions on any range of topics — managing schools during the pandemic, cybersecurity — and apologized for her early missteps.

“Yes, we’ve made mistakes, and I’m annoyed at myself,” she said. “But I know where I want to go.”

If there is one thing that sets Ms. Baerbock apart from her rivals, it is this relative openness and youthful confidence combined with a bold vision. She is the next generation of a Green Party that has come a long way since its founding as a radical “anti-party party” four decades ago.

In those early days, opposition, not governing, was the aim.

For Ms. Baerbock, “governing is radical.”

Her party’s evolution from a fringe protest movement to a serious contender to power in many ways reflects her own biography.

Born in 1980, she is as old as her party. When she was a toddler, her parents took her to anti-NATO protests. By the time she joined the Greens as a student in 2005, the party had completed its first stint in government as the junior partner of the Social Democrats.

By now, many voters have come to see the Greens as a party that has matured while remaining true to its principles. It is pro-environment, pro-Europe and unapologetically pro-immigration.

Ms. Baerbock proposes spending 50 billion euros, about $59 billion, in green investments each year for a decade to bankroll Germany’s transformation to a carbon-neutral economy — and paying for it by scrapping the country’s strict balanced budget rule.

She would raise taxes on top earners and put tariffs on imports that are not carbon neutral. She envisions solar panels on every rooftop, a world-class electric car industry, a higher minimum wage and climate subsidies for those with low incomes. She wants to team up with the United States to get tough on China and Russia.

She is also committed to Germany’s growing diversity — the only candidate who has spoken of the country’s moral responsibility to take in some Afghan refugees, beyond those who helped Western troops.

Ms. Baerbock’s ambitions to break taboos at home and abroad — and her rise as a serious challenger of the status quo — is catching voters’ attention as the election nears.

It has also made her a target of online disinformation campaigns from the far right and others. A fake nude picture of her has circulated with the caption, “I needed the money.” Fake quotes have her saying she wants to ban all pets to minimize carbon emissions.

Ms. Baerbock’s enemies in the mainstream conservative media have not held back either, exploiting every stumble she has made.

Many of those who heard her speak in Bochum recently said they were impressed by her confident delivery (she spoke without notes) and willingness to engage with voters in front of rolling cameras.

“She focused on issues and not emotions,” said Katharina Münch, a retired teacher. “She seems really solid.”

Others were concerned about her young age and lack of experience.

“What has she done to run for chancellor?” said Frank Neuer, 29, a sales clerk who had stopped by on his way to work. “I mean, it’s like me running for chancellor.”

Political observers say the attacks against Ms. Baerbock have been disproportionate and revealing of a deeper phenomenon. Despite having a female chancellor for almost two decades, women still face tougher scrutiny and sometimes outright sexism in German politics.

“My candidacy polarizes in a way that wasn’t imaginable for many women of my age,” Ms. Baerbock said, sitting in a bright wood-paneled cabin on the top level of her campaign bus between stops.

“In some ways, what I’ve experienced is similar to what happened in the U.S. when Hillary Clinton ran,” she added. “I stand for renewal, the others stand for the status quo, and of course, those who have an interest in the status quo see my candidacy as a declaration of war.”

When Ms. Merkel first ran for office in 2005, at 51, she was routinely described as Chancellor Helmut Kohl’s “girl” and received not just endless commentary on her haircut, but relentless questions about her competence and readiness for office. Even allies in her own party dismissed her as an interim leader at the time.

Ms. Baerbock’s answer to such challenges is not to hide her youth or motherhood, but rather to lean into them.

“It’s up to me as a mother, up to us as a society, up to us adults to be prepared for the questions of our children: Did you act?” she said. “Did we do everything to secure the climate and with it the freedom of our children?”