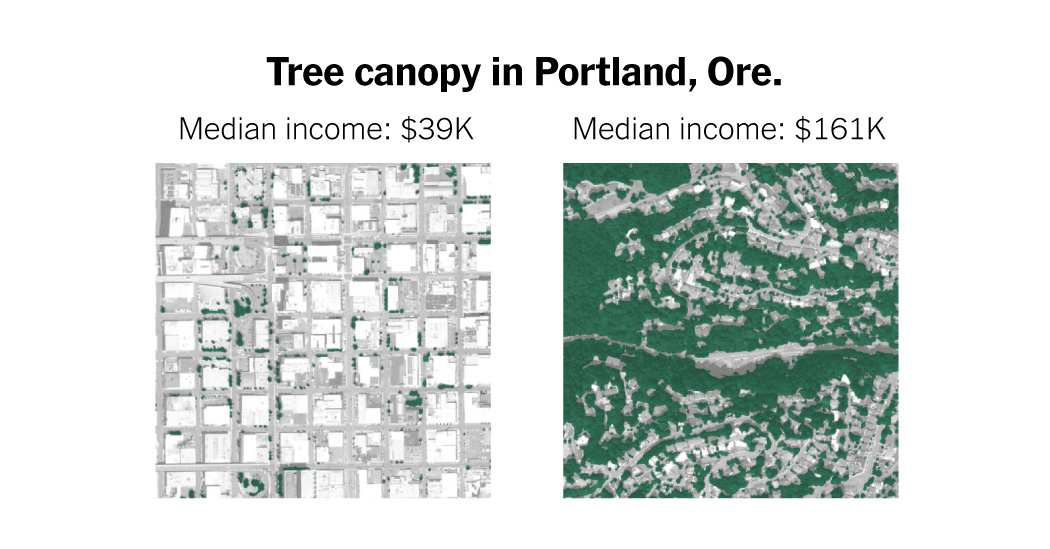 
By Ian Leahy and Yaryna Serkez

Ian Leahy is the vice president of urban forestry at American Forests. Yaryna Serkez is a writer and a graphics editor for Opinion.

Access to clean air and outdoor activities seems like a basic right. But in cities across the country, lower-income communities and communities of color more often live in neighborhoods with a higher share of concrete surfaces such as roads, buildings and parking lots, and a very limited number of trees and parks.

In the most extreme cases, wealthy areas have 65 percent more tree canopy than communities where nine out of 10 people live below the poverty line.

Communities with too few trees are feeling the consequences this week, as a heat wave sweeps through much of the Pacific Northwest. The average temperature can vary to up to 10 degrees between places with trees and those without. And where there is more heat, there is more death: Heat kills more people in the United States than any other kind of extreme weather. We can expect up to a tenfold increase in heat-related deaths in the eastern United States by the latter half of the 2050s and at least a 70 percent increase in the largest cities nationwide by 2050.

Being in the vicinity of this living infrastructure provides many other benefits: Healthy trees trap air pollutants, which helps avoid 670,000 incidences of acute respiratory symptoms each year. Being in the presence of trees has also been found to improve youth educational performance, mental health, physical health and social connections. A well-maintained tree canopy may even reduce several types of crime and create economic opportunities, including careers that cannot be outsourced to plant and maintain those trees.

So if there is no question that trees are important, why doesn’t everyone have access to them? There is an emerging body of research from the U.S. Forest Service and others that has found a direct relationship between tree canopy today and discriminatory policies of the past.

In predominantly white areas, trees cover one-third of the surface. In communities of color, barely one-fifth.

For example, from the 1930s to the 1960s and even the 1970s, a practice of discriminatory lending now known as “redlining” was carried out in cities across the country, from Los Angeles to Baltimore. Color-coded maps dissuaded not only mortgage but also health care and infrastructure investments based on where people lived. The red lines that were drawn around neighborhoods — predominantly Black as well as Catholic, Jewish and immigrant — now often line up very closely with maps showing a lack of tree canopy today.

Areas that were given an “A” grade at the time were characterized by U.S.-born white populations in newer houses. Today, these same neighborhoods have nearly twice as much tree coverage than communities of color that were “redlined” by receiving the “D” grade, according to a recent paper analyzing 37 metro areas.

These disinvestments have a tangible impact on social equity issues. A University of Illinois Urbana-Champaign study of 98 Chicago public housing buildings with residents of similar socioeconomic situations found that when controlling for a number of other factors, more vegetation near a building contributed to 52 percent fewer crimes overall and 56 percent fewer violent crimes.

With temperatures rising and economic disparities widening, trees are indispensable infrastructure. However, ensuring the right tree is planted in the right place is no easy feat. It requires expertise in selecting the most resilient and beneficial species. Planners must prepare for warming climates, allow existing trees to thrive and integrate new trees with competing infrastructure. Political will and financing from the public and private sectors are needed long before a tree is planted.

Despite these challenges, opportunities can be found everywhere.

Tree Equity Score shows it will take 522 million more trees to achieve an equitable balance of greenery in every neighborhood in metro areas with 50,000 people or more in the continental United States.

Getting there requires a lot more funding to both plant new and maintain existing trees. Some promising tools have emerged to help boost investment, including social impact bonds (which pay investors based on such outcomes as reduced prison recidivism) and voluntary carbon markets like City Forest Credits (a registry that issues tree planting and protection credits that can be purchased by companies to offset emissions).

But an ambitious goal like 522 million new trees cannot be achieved without the public sector. There are numerous opportunities to begin addressing tree equity in cities, such as through the infrastructure legislation working through Congress, substantially increasing support for the Urban and Community Forestry program and proposals to create programs at federal agencies focused on housing, energy and transportation.

Reaching these ambitious targets would have an outsize impact on life-saving health outcomes, quality of life and slowing climate change, all while supporting over three million jobs, especially in neighborhoods that now lack greenery. 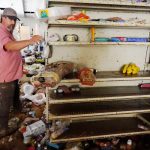