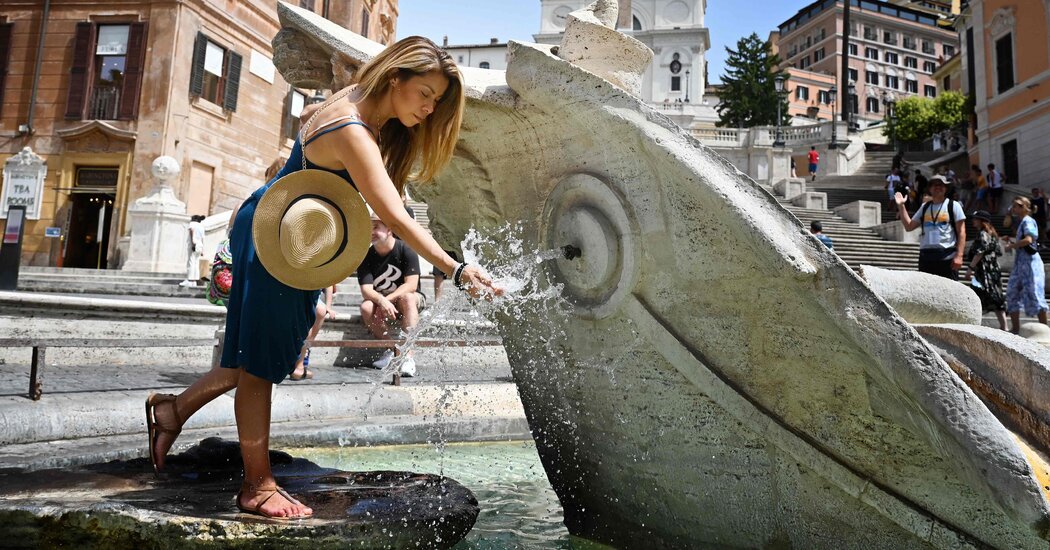 A monitoring station on the Italian island of Sicily reached a scorching temperature of 48.8 degrees Celsius, or 119.84 degrees Fahrenheit, on Wednesday. If verified by the World Meteorological Organization, it would mark the hottest temperature ever recorded in Europe, topping the previous record of 48 degrees set in Athens in July 1977.

Though long accustomed to the summer heat, Sicilians don’t need an official record to tell them that this season has been particularly oppressive.

“I have no memory of such an unbearable heat,” said Francesco Italia, the mayor of the ancient city of Syracuse, near where the station recorded the potential heat record, in a phone interview. “It is so humid that you just can’t be outside after a certain hour.”

Elsewhere around the Mediterranean, after 10 days of battling blazes across the country, firefighters in Greece managed to contain most of them on Thursday, although a thunderstorm was a mixed blessing: The rain doused some of the smoldering fires, but lightning sparked new ones.

Prime Minister Kyriakos Mitsotakis of Greece said radical changes were required to prevent and respond to the “megafires” that have raged in many parts of Europe this summer amid record-breaking heat waves. “The climate crisis is here,” Mr. Mitsotakis told reporters, adding that “everything needs to change,” citing energy policy and the way people treat the environment.

He noted rising temperatures and destruction from fires in Algeria, Sicily and Turkey. “This is not just a Greek phenomenon. It is Mediterranean, it is global,” he said, adding that countries should work together against this “common crisis.”

In Turkey, only days after wildfires razed whole villages in the southern part of the country and forced thousands to flee, rescue crews struggled on Thursday to evacuate scores of people and find the missing after heavy rain caused flash flooding in the northwestern region of the country.

At least nine people have been killed in the floods, which have affected three provinces, according to Turkish authorities, and at least five children are missing — including four from the same extended family in the small town of Bozkurt, in the Kastamonu Province.

Fatih Karaalioglu, an uncle of the children, made a plea for help on Twitter. “Our children are under the ruins,” he wrote. “Help us.”

On Sicily, Mr. Italia said that residents of Syracuse were experiencing electrical shortages because of the large number of air-conditioners working day and night. The local Civil Protection Agency was patrolling the territory to help older residents and was on high alert for blazes that could escalate into the raging wildfires that ravage the vast, arid region every summer.

“As Sicilians, historically troubled by water shortages, we need to rethink many things for the next generation,” he said.

Italian firefighters said on Thursday that half of the fires active in the country in the last 12 hours were located in Sicily, where a large area of a natural reserve in the northern mountains was burning, destroying farms and homes.

“In recent years, we have observed more frequent and more intense heat waves,” Antonello Pasini, a climate change physicist at Italy’s National Council for Research, said in a phone interview.

In the town of Floridia, the closest urban center to the monitoring station that recorded the record high on Wednesday, people were trying their best to carry on.

“We do our best,” said Giovanna Catania, a local pharmacist. “But as people, we were not born to live in such a heat.”

‘It was sad having to leave’: Climate crisis splits Alaskan town in half | Climate change