The Nationals are considering whether to support the Liberals’ “preference” for net zero emissions by 2050 as the junior party prepares to renegotiate the Coalition agreement.

Following his resurrection as Nationals leader, Barnaby Joyce left open the possibility of supporting a net zero pledge, saying he would be “guided” by the party room on whether to support the target.

Nationals ministers are now positioning the party to strike a deal on energy policy they hope will benefit farmers as part of the fresh Coalition deal.

Ahead of the Cop26 climate summit in Glasgow in November, the government has been working on a proposal for net zero by 2050, but treading carefully given the need to manage internal critics.

The Nationals deputy leader, David Littleproud, said the party was prepared to look at a proposal for net zero but regional Australians would need to get a better deal.

“We get it all right but we are not going to trade ourselves away until we can see the detail and see what we can get,” Littleproud told Sky News on Tuesday. “We copped it in the neck in regional Australia for everyone to sleep soundly in metropolitan Australia and it is time our mob got repaid for it.”

Nationals MP Keith Pitt, the resources minister, said that while discussion within government was ongoing no “final commitment” to achieve net zero by 2050 had been landed.

“For us, as members of the party that represents regional Australia, we want to ensure that those costs are not passed on to the people we represent; that we very, very clearly understand what the path is, what the cost will be, and who’s paying,” Pitt said.

“We will look forward to seeing what a proposal may or may not be. That hasn’t been established yet. We are committed to 2030. Before we all get too agitated and worked up we should recognise the results we’ve had already.”

The veterans’ affairs minister, Darren Chester, who backed the former Nationals leader Michael McCormack in Monday’s spill, said regional communities were affected by climate policy and change was not an “abstract argument”.

“We want to make sure our people, their jobs are protected and they’ve got opportunities to be part of those renewable opportunities as well,” Chester said.

In parliament on Tuesday, Labor targeted the resurrected Joyce for previously calling investment in renewables “insane and lemming-like”.

“And (he) said the Nationals have always been opposed to a net zero target,” the opposition leader, Anthony Albanese, said.

Despite leaving open the possibility of supporting net zero by 2050, Joyce has spent much of the past year as a backbencher railing against the concept, labelling it “climate socialism” and suggesting it is not a priority.

“What do you want to hand on to your children? Our country or an emissions target?” he said in a recent Facebook post.

The Liberal MP Dave Sharma told the ABC that he was confident Morrison would not change tack on pursuing net zero by 2050 despite the “internal differences”.

“We do need to build a broad political consensus within Australia. That involves regions and cities and different states and the more resource-exposed industries if we’re to get this done.”

He said the view expressed by Morrison reflected the Liberal party’s position and “I don’t expect the prime minister will change his position on this”.

The environment minister, Sussan Ley, also insisted “net zero is not dead in the water”. “Net zero will happen as soon as possible and the prime minister has made that very clear,” the Liberal minister said on Tuesday. 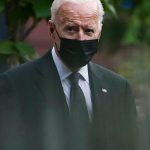 Opinion | How Does Biden Recover From His Week From Hell?

Resistance in the ranks: any nudge by Morrison towards net zero by 2050 will be a tough sell to LNP | Liberal National party