Boats have been chartered. Weekend arrangements cancelled. And hundreds of twitchers – whose aim is to see very rare birds in Britain – have been praying the latest arrival stays long enough for them to see it in the flesh.

The bird in question is an Egyptian vulture. This is the smallest member of its family in Europe, yet still sports a 1.7-metre wingspan, not much smaller than a golden eagle. The reason for all the excitement is because this is only the third Egyptian vulture ever seen in the wild in Britain; and, incredibly, the first since 1868. That one, found in Essex, was shot by a farm worker who saw “a strange bird” amongst some geese.

So it’s hardly surprising that when one turned up last week, on Tresco in the Scilly Isles, it sent Britain’s twitching community into a frenzy. With its striking blond punk hairdo, it was described by leading Scilly birder Will Wagstaff as looking like the 1980s pop star, Billy Idol. For Wagstaff, catching sight of the vulture was one of those “am I dreaming?” moments. “To look up, and suddenly realise you are watching a bird that hasn’t been seen in Britain for over 150 years, is just incredible.”

Yet this is not the first rare raptor to turn up unexpectedly in Britain. Just last summer, a bearded vulture – one of the largest European birds of prey – arrived, equally unexpectedly, in Derbyshire. Ignoring lockdown restrictions, hundreds of people tramped across the Peak District to see the bird. Despite the real danger of the vulture being shot – illegally – by landowners, it eventually headed safely back across the Channel.

Less spectacular species are also arriving on our shores. Last week, news broke of a colony of the small-flowered tongue orchid – the first in Britain for over 30 years – on the roof of the Nomura International bank, in the City of London. While this may seem an unlikely spot for one of Britain’s rarest flowers, the firm’s resident ecologist pointed out that orchid seeds are incredibly small and light, so could have drifted here from the Mediterranean on southerly winds. Or, as he also suggested, they might have been brought to London in the soil used to create the bank’s rooftop garden.

Wild flowers are not the only accidental stowaways arriving from continental Europe. The long-tailed blue, one of the world’s commonest butterflies, has turned up along the south coast in increasing numbers in the past few years. But although many of these butterflies may be genuinely wild, others are being accidentally imported as eggs or pupae on plants brought over from Europe to commercial nurseries.

Deliberate – but unofficial – introductions are also causing concern. As Guardian writer Patrick Barkham pointed out last autumn, “maverick rewilders” – enthusiasts who breed rare butterflies in captivity and then secretly release them at new sites – are muddying the waters when it comes to assessing which species are arriving here naturally. As Butterfly Conservation’s chief scientist, Nigel Bourn, notes: “Such introductions can cause confusion, and deflect action away from other conservation priorities, in the end doing more harm than good.”

The debate over which new arrivals are “natural”, and which have been given a helping hand – deliberately or accidentally – is further confused by the climate emergency. Many birds, butterflies and other insects are shifting their ranges northwards because of rapidly warming temperatures. Some stop at the French coast, unwilling or unable to cross over the Channel. Others, such as the southern migrant hawker dragonfly and willow emerald damselfly, have colonised southern England. Meanwhile, a trio of once-exotic waterbirds – little, great white and cattle egrets – are now a common sight around my home on the Somerset Levels.

Invertebrates are especially reactive to rising temperatures, as butterfly expert Matthew Oates points out: “Warmth-loving winged insects push limits in response to climate change. Moths and dragonflies are particularly good at it, as are some hoverflies and butterflies.”

Yet whether these species’ range expansions can truly be described as “natural” is open to debate, given that climate change is known to be anthropogenic – caused by our profligate use of fossil fuels.

A warming climate is just one of many threats facing the Egyptian vulture, which is also very vulnerable to poisoning, persecution, and collisions with power lines during its twice-annual 5,000 km journey from southern Europe to sub-Saharan Africa and back.

In recent decades, the world population of the species has declined to as few as 12,000. The vulture’s status has recently been downgraded to “endangered” – two steps away from global extinction. In Europe, numbers have fallen by more than half in the past 50 years, with most found in Spain and Portugal.

Back on the Isles of Scilly, some have wondered whether the Egyptian vulture is a truly wild individual or if it originated from a French reintroduction scheme to help boost their flagging population. In the bird’s favour, as Wagstaff reports, it did arrive at the same time as an invasion of painted lady butterflies from continental Europe, on a warm south-easterly airstream.

That’s good news for the twitchers. The bad news is that the vulture appears to have left the islands, heading who knows where. So, if you live in southern Britain, it’s worth looking up over the next few days, in search of one of the rarest birds ever to fly through UK airspace.

Stephen Moss is a naturalist and author, and runs an MA in Nature and Travel Writing at Bath Spa University. His latest book is Skylarks with Rosie: A Somerset Spring (Saraband) 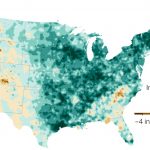 America Today: Too Much Water, or Not Enough