In the wake of the IPCC’s alarming warning last week that human induced climate change is affecting every corner of the planet, China’s environmental activists were left wondering what they could do to push their government into taking more action.

Having prioritised rapid economic development for decades, China is responsible for a long list of environmental disasters and concerns, and produces around a third of the world’s carbon emissions. It has made ambitious pledges to hit peak emissions by 2030 and be carbon neutral by 2060, but still drawn warnings that it may not be possible under their current trajectory.

Beijing is far from alone in being accused of doing too little in the face of climate change, but inside China any attempt to criticise the government for inaction is increasingly dangerous.Marches and protests seen over the world calling for greater action against an existential threat are largely impossible in China.

“To [criticise the government] publicly… There will be consequences, they will come one day,” says a former Chinese environmental journalist who now lives overseas. “It could be a removal of your operational license or just harassment of individual employees.”

Amid a nationwide crackdown on dissent and activism – including LGBTQ rights, feminism, human rights, political freedoms and environmentalism – activists and non-government organisations fear expulsion, harassment, or worse if they criticise the government.

In recent years authorities have arrested countless environmental protesters, whistleblowers and concerned citizens. They are often charged with the ubiquitous catch-all of “picking quarrels and provoking trouble”, a crime frequently levelled against pesky activists. Some, like Ou Hongyi, China’s answer to Greta Thunberg, have left the country and now lobby from the outside.

“With all these examples of the suppression of people just holding different opinions to the central government, there is fear growing,” the former journalist says.

Current and former environmental activists and journalists, many of whom declined to go on the record for fear of repercussion, described to the Guardian a sector working quietly and fearfully to navigate a government hypersensitive to any criticism.

The former journalist says just a decade ago was a “golden time” for environmental journalism and activism, where investigations and campaigns – while risky and still bound by red tape – were often tolerated and saw results. Now, NGOs are just trying to survive, eking what they can from a government which won’t abide criticism of any kind.

“[Climate activism] exists in China, but it’s not the same format, or the same perception of western democratic environmentalism. It’s environmentalism with Chinese characteristics,” she says.

“The thing is you have to show you’re willing to cooperate, and that you come with constructive criticisms, and you follow the government agenda – say the 2030/2060 carbon goals. You don’t say ‘it’s too late’, you say ‘here is our proposal’.”

It leaves international NGOs in a tricky spot, having to balance the benefits of a local presence with having to keep quiet.

Dr Liu Junyan, head of Greenpeace’s climate risk project in Beijing, says most environmental movements are driven by the government or elites, and others have to work on the sidelines educating community leaders to filter concerns up through the ranks, hoping the government eventually adopts it for their agenda.

“We are trying to figure out unique engagement pathways. I don’t think many NGOs especially international NGOs, have found the pathway,” Liu says.

It worked for air pollution campaigns around 2012, when the public and then the government got behind it as a health issue, she says.

Some, like leading Chinese environmentalist, Ma Jun, have come up with innovative ways using government data to shame polluters and emitters without crossing government red lines. Private meetings can also go a long way if local officials are open-minded and willing to talk, but if not, there’s little one can do.

“You can not get the Chinese government to do anything if they don’t listen to you,” says the head of a Chinese NGO, which specialises in community education.

But a major impediment is low awareness of the climate crisis among the general population, thanks to muzzled activists, online censorship, and little focus on the issues by the media and education system. Searches for “China global warming” on government news sites return nothing.

“I think basic education should include climate change, it is a very important topic to educate students,” he says. “However, when we go to school and try to share our knowledge, we find that even the teachers don’t have a deep understanding of climate change.”

Liu says there has been improvements, and after Xi announced his carbon pledges there was a noticeable willingness in state media to finally discuss climate change. But still, “the bulk of the general public have a limited idea of what climate change is and a low perception of how it will affect their lives. [It means] there is limited activism from the bottom up”.

State media coverage of the report noted the devastating climate disasters of recent months in China. But it also largely praised or avoided mentioning China’s efforts, and calls for action highlighted the inadequacies of foreign governments or societies instead.

“Have you counted the wild fire carbon emission in United States, Australia and Canada?” one commenter said.

“It will improve a lot if American eat less beef and avocados,” said another.

The former journalist doesn’t know where “activism with Chinese characteristics” goes from here, and says her generation of environmentalists have largely walked away from it. She questions whether the young people like Ou actually benefit from having grown up in the harsher, propaganda-heavy environment.

“This might be a pattern of young Chinese who grow up and live abroad, participating… and joining the international wave of activism. Because fundamentally climate change is not just a Chinese issue, it’s a global issue.” 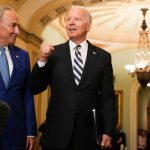 World ‘must step up preparations for extreme heat’ | Climate change