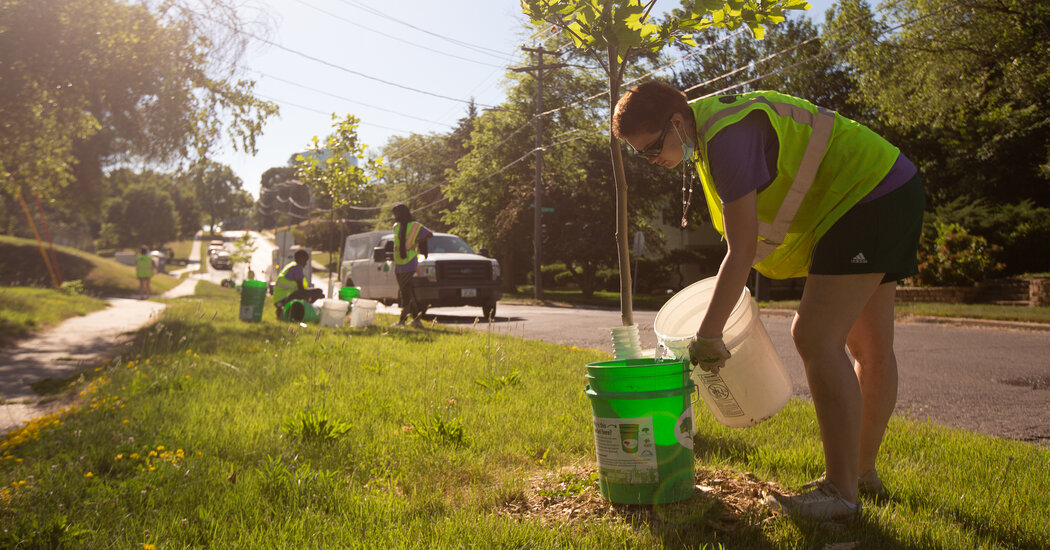 At the same time, American cities are facing a heat crisis: The largest are warming at twice the rate of the planet as a whole.

On an afternoon that felt too sweltering for June, a 14-year-old named Kiara Wright bent over a young honey locust along a busy road in Des Moines, carefully splashing water from two five-gallon buckets into the dry soil. The city was in drought, and abundant water is critical to trees for at least two years after the shock of transplanting.

Earlier in the spring Kiara had helped plant that season’s 500 trees, becoming fond enough of them to name a few: Sparkles, Linden, José. Now she was watering, mulching and pulling weeds for $10 an hour. Over the course of the summer, her small team would also learn about financial literacy and shadow people in various green jobs.

“We grow the trees and we grow the teens,” said Kacie Ballard, who coordinates the program for Trees Forever, a nonprofit group that is now planting almost all of the city’s street trees. “It’s cheesy but it’s true.”

Along with the environmental benefits of trees come economic opportunities.

“This is a field where the employers are begging,” said Jad Daley, president and chief executive of American Forests, a nonprofit group. “There is definitely a job waiting.”

Planting in Des Moines will resume in the fall, focusing on formerly redlined communities most in need of trees. Around the country, racist policies have left these neighborhoods especially bare and hot.

Leslie Berckes, director of programs at Trees Forever, hopes to get 1,000 trees in the ground by the end of the year, surpassing an agreement with the city. But the number still feels bittersweet. Four times that many are needed, on public and private land, to reach a state goal of increasing canopy 3 percent by 2050. Instead, she fears their efforts are not enough to stay even.

After Covid, the climate crisis will be the next thing the right says we ‘just have to live with’ | Aditya Chakrabortty

Stories to save the world: the new wave of climate fiction | Books