The UK government is under pressure to adopt World Health Organization guidelines for air pollution. This is a debate about the air outdoors. Step off the pavement into a train station, shop or football stadium and the limits do not apply. Should the same levels of protection apply to indoor public spaces?

Diesel trains mean nitrogen dioxide in King’s Cross and Paddington stations in London, and Waverley station in Edinburgh are about twice the annual limits for outdoor air. In Birmingham New Street it is about eight times more.

Particle pollution on London Underground depends on which line you take. Averaged over 22 journeys, researchers found PM2.5 particle concentrations that were about 30 times the annual WHO guidelines. A brief investigation in Glasgow’s subway showed similar figures but data is lacking for the systems in Liverpool and Tyne and Wear.

Measurements from high streets in Dublin show air pollution in shops depends a lot on the ventilation system, while a study from France shows merchandise can affect air in shops – the worst being a car equipment store, followed by clothing, shoes, and leather, and DIY stores.

In football stadiums smoke from cigarettes, flares and fireworks, along with the cooking of match-time food, can cause air pollution problems. 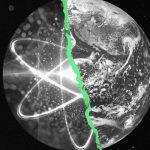