In the depths of winter, at the pandemic’s height, an idea of this summer took hold. It would, we told ourselves, be the summer of outdoors, particularly for children, who had been shut inside on screens for too long. Travelling abroad might be out, but that was fine. If the past year had taught us anything, it was the value of small pleasures, closer to home. On freezing March days, I warmed myself with an image of July and August in Central Park. I would read and commune with nature while camp counsellors forced my kids to spend eight hours a day playing rounders.

As it turns out, this isn’t really happening. We’re almost halfway through the absurdly long school holidays – New York state schools let out in June and don’t go back until 13 September, a closure of almost 11 weeks – and for the first time, our summer schedule is being influenced less by cost, work or babysitting, than by something to which I’ve never given serious consideration: weather.

Summer in the city is always sweaty, of course. On days of high humidity, being outside isn’t fun. Last year, cooling stations were set up in libraries and community buildings and the words “heat advisory” were on the radio so often one ceased really to hear them. It was a normal summer, in other words; slightly warmer than usual, perhaps, but nothing that registered as out of the ordinary. This year is different. By the end of June, heat records were being broken all across the east coast – hitting 37C (99F) in Hartford, Connecticut (unseating the record from 1934), and 36C in Providence, Rhode Island and LaGuardia, New York.

If it was just the heat, one might shrug it off. We’re accustomed, at this point, to records being broken, and well practised at ignoring the implications. But the weather isn’t just hot, it’s weird. Severe thunderstorms and rainfall have been so frequent in New York this year that by mid-July almost twice the amount of rain had fallen than is usual for the entire month. The subway flooded, although not as catastrophically as in China this week – one of many tragedies that were described, in an echo of the flooding in Germany a week earlier, as “once in a millennium”. During the thunderstorms in New York a sudden sharp wind blew my kids literally off their feet. We have been reading about climate change for many years now, but for those of us lucky enough to live in well-insulated cities with good flood defences and air conditioning, this is the first time we have really felt it.

This impression of a sudden departure from normal was no more apparent in New York than on Tuesday last week. City camps were closed that day for Eid and we arranged a playdate in Central Park. “What’s wrong with the sun?” asked my daughter, squinting up at the sky like a badly scripted kid in the first 10 minutes of a disaster movie. We all looked up. The sun was an orange ball, shrouded in haze. The entire park, in fact, was bathed in an eerie half-light. “It looks like the end of the world,” said my friend, and did a quick phone search on air quality. “Oh, wow,” she said. At that moment in New York, the air quality index was 157, well over the 100 threshold for safe-to-breathe. It was, it turned out, the residue of smoke haze drifting over the US from the wildfires in Oregon, and the air quality in New York that afternoon was the worst in the world.

There have been other unignorable anomalies. The huge heatwaves in the Pacific north-west earlier this year were, quite apart from the death toll, accompanied by some startling imagery: that of thousands of shellfish being effectively cooked alive. In California, winegrowers are – it sounds like a joke, but isn’t – putting sunscreen on grapes to stop them turning to raisins on the vine. In the UK, hailstones the size of golf balls fell in Leicestershire and parts of west London flooded.

Most days, it’s too hot here to think about putting the kids in the park for too long, unless they are going to be standing in one of the sprinklers. Instead, they are sitting out most of the summer inside an air-conditioned building, with occasional breaks to the basketball court on the roof. It’s OK. They seem happy. But it’s also strange, and unavoidably sinister. 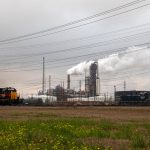 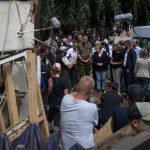